Ford is one of the largest automobile manufacturers in the world, delivering a dependable and affordable line of cars and trucks since 1903. Ford offers mass appeal and high-quality products delivering only top performance and power. Due to the company’s dedication and perseverance to introduce reliable, attractive cars to the market, Ford quickly became a well-known vehicle manufacturer over the years. Continuing to produce nothing less than excellence, Ford not only fits the buyer’s needs, Ford vehicles are reasonably priced. Ford vehicles offer luxurious features and designs while maintaining affordable price points for their consumers. Ford also ensures each of their vehicles are distinctive from one another to set them apart from the plethora of cars and trucks on the market today.

The manufacturing process is what also sets Ford apart. When Ford first started producing cars, their manufacturing assembly line allowed individual workers to stay in one place and repeat the same job on the multiple vehicles which passed through their station. Providing competitive efficiency, this new technique of mass production revolutionized the American car industry's manufacturing process.

With the great features and popularity of certain Ford cars, Ford has reproduced classic Ford models like the Ford Mustang. First available in 1965 the Shelby Mustang became a performance icon and was reintroduced in 2007. 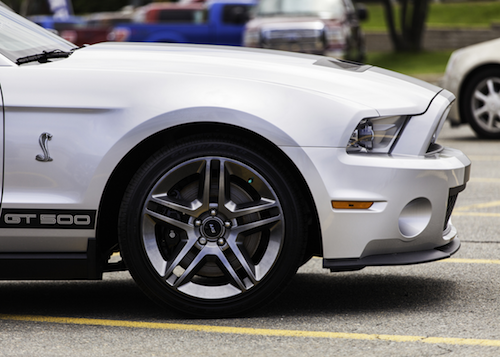 Need a Part for your Ford?  B&M Auto Sales & Parts has the Following Parts in Stock:

If you can’t find what you are looking for please give a call!

B&M Auto Sales & Parts is one of Milwaukee’s largest used car part dealerships and proudly carries Ford parts. Our massive on-site auto salvage allows us the ability to carry a huge variety of used auto parts.  And, if we don’t have the part you need, we’ll find it for you! Our advanced technology provides us the opportunity to search for any part from anywhere. The ADP Hollander Interchange computer system allows us to quickly find used Ford auto parts by searching the inventory from auto parts recyclers all over the country.